How Do We Fill the Pipeline With Board-Ready Women?

This article originally was published in The Globe and Mail, March 7, 2016.

On Tuesday, countries around the globe join in celebrating International Women’s Day, honouring the achievements of women and mobilizing with programs to close the gender gap. This year’s theme, Pledge for Parity, is a call to accelerate equality, with a special emphasis on shrinking the gender gap in leadership positions.

It’s time to consider what this means for Canada’s leadership landscape. We need to take a close examination of who our CEOs are and who is seated in our boardrooms.

It has been just over a year since new regulations required companies listed on the Toronto Stock Exchange to annually disclose the percentage of women on their boards of directors and in executive officer positions. Now companies must report their goals and the actions being taken to increase their figures, or provide reasons when no such targets exist.

Proponents of the legislation hope that the guidelines will raise the percentage of board seats held by women to 30 per cent – but even they acknowledge that progress beyond that level will require a more robust pipeline of female executive candidates. To truly achieve gender-balanced boards, we need to examine some of the root causes of the imbalance. While tremendous energy is being exerted on quick fixes, how do we take a long-term approach?

As someone who works closely with boards and CEOs to identify and develop the next generation of business leaders, I believe that we need to closely examine women in mid- to senior-leadership positions today to build a more robust executive pipeline – particularly since many companies are inadvertently hampering their own progress.

Consider what happens when a high-potential female executive returns from family leave, seeking a position that allows her to ease back into the workforce. Often, companies respond supportively by transitioning her from an operational role into a functional support role, allowing for career development that builds functional expertise and deepens her contribution and seniority without the time and travel demands of operational leadership.

At face value, this seems to be a win for all parties. But there’s a catch. These women with exceptional potential wind up in positions where they get overlooked for future growth or profit-and-loss leadership opportunities. Their steady success in transitional and functional roles limits their potential for future CEO or board roles.

As board positions become available and nominating committees seek new director candidates, they invariably prefer those who have been CEOs or heads of business units, bringing effective P&L management.

Our research shows that 21 per cent of the direct reports to the CEO of TSX 250 companies are women, while two-thirds of those women are leading support functions. Of the direct reports who have operating leadership roles, just 7 per cent are women. The pipeline of board-ready women doesn’t flow.

While we work to make the number of women in the boardroom rise above 30 per cent, both corporate Canada and female executives need to focus on building operational excellence. We must have more female contenders for CEO succession, and in order for this to happen, must collectively consider and thoughtfully engage in career-path decision-making.

Only by addressing these root issues can we hope to move toward full gender equality at the top of the corporate pyramid. 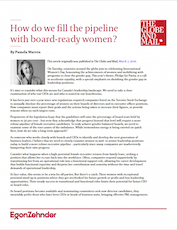 How do we fill the pipeline with board-ready women?
Download as PDF 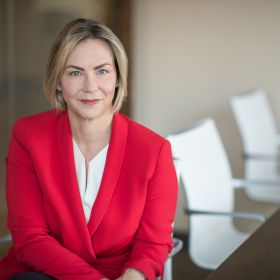 Pamela Warren
Toronto
Pamela Warren, based in Toronto, has deep expertise in leadership best practices, CEO succession, and board recruitment and effectiveness.
阅读更多...