New York City has become the latest in the list of cities and states that are implementing new policies directly aimed at leveling the playing field, making it illegal for companies and organizations recruiting on behalf of a company to ask for the salary history of job candidates. These are important steps in the push to eliminate the gender pay gap.

We believe this is just the beginning – salary inquiry bans in Delaware and California go into effect in December 2017 and January 2018, respectively, with Puerto Rico to follow in March 2018. Bans in Massachusetts and San Francisco begin in July 2018, and there will undoubtedly be more to come as cities like New Orleans and Pittsburgh have instituted rules banning salary history inquiries for city employees, and Philadelphia’s ban is currently on hold.

By putting these rules into effect, the idea is to stop the common practice of basing a job offer on a percentage increase above the candidate’s most recent salary - a practice that has for years perpetuated the pay gap for women who currently make just 82 percent of men’s earnings. With this new law taking effect, organizations are likely to start asking for compensation expectations instead – a much more reasonable approach.

But, while we applaud and are active in efforts to eliminate the gender pay gap, the solution goes beyond this law. Women still need data and knowledge in order to set appropriate and fair expectations for their own compensation. In the absence of this transparency, it will remain difficult to negotiate on your behalf and we believe women may still be at a salary disadvantage.

To truly eliminate the gender pay gap, we believe more data and transparency is critical. Here are three ideas that we believe will make a key difference.

1. Companies: Don’t just extend the offer, include the rationale behind the offer
Instead of simply talking about the salary offer or pay raise in isolation, share the rationale behind it. This could be the salary band for the candidate and a percentile of the offer compared against those in the peer set or tenure. This approach aligns the motivations of the incoming executive with that of the organization extremely well, ensuring there are no pay inequities on either side of the relationship. This level of transparency is just as important for internal promotions or job rotations. Companies can demystify the salary conversation by providing more context around the numbers.

2. Candidates and employees: Ask for and promote transparency, even among your peer group
Sometimes getting data won’t be easy, and you’ll need to take matters into your own hands. Seven years ago, a peer of mine proactively shared his compensation with me. I was frustrated to learn that although we were one year apart in age, had graduated from the same grad school, had the same role and tenure at our company and similar yearly reviews, he made 20 percent more than I did. Having this knowledge enabled me to speak with my company and negotiate a pay raise almost immediately. Fast forward 10 years, and that 20 percent pay raise compounded by 10 has eliminated my gender pay gap and given me roughly two years of additional pay.

And of course, this isn’t easy – it’s scary to ask and share what you make with your peers and even trickier to decide what to do with that information if a major gap is discovered, but perhaps it shouldn’t be and won’t be in the future. Find peers you trust and who have similar performance to you: proactively share with them, and then talk to them about how to resolve it. You might be surprised at their willingness to help you.

3. It takes all of us: Once you have the data, we all need to have the courage to speak up
All the data in the world won’t help unless it is paired with the courage to champion pay equity between genders. Men and women must solve this together. This means women need to advocate on their own behalf, but it also means that men need to have a strong voice when they see salary discrepancies. If this doesn’t come naturally to you, find someone who will help you develop and articulate your thoughts. Practice and don’t be afraid to be authentic and open with your organization.

While this law is an important step forward for New York City and hopefully more cities and states to follow, these bans won’t be an overnight fix for the gender pay gap. Companies must acknowledge the wage parities that exist and embrace this as an imperative, starting first by evaluating policies. Individuals can add to this momentum by inviting more transparency among their peer set. Collectively, these actions help move us closer to a world in which men and women are paid equally and fairly. 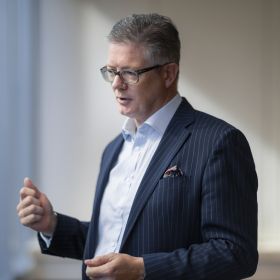