Your Leadership Portfolio: Developing the Competencies of a Future-State CIO

Outstanding CIOs most resemble outstanding CEOs. That was the eye-opening benchmark established when the CIO Executive Council, as part of its Future-State CIO® initiative, teamed up with Egon Zehnder two years ago to build a leadership competency assessment for CIOs and senior IT leaders.

Egon Zehnder provided its model of the 10 competencies that leaders typically have, no matter their functional area or role. As depicted in the colored bubble legend across the bottom of the Future-State CIO Leadership Competencies Journey graph, these competencies are based on more than 25,000 evaluations of senior executives, including CEOs, CFOs, COOs and CIOs. 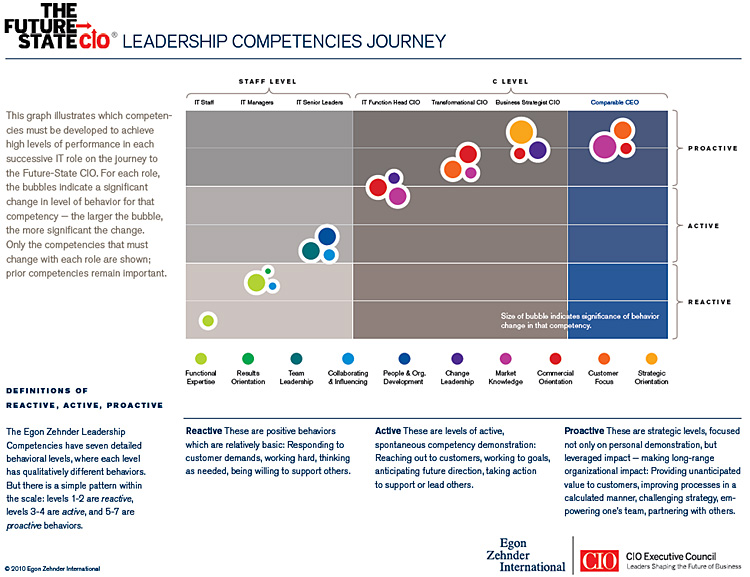 The model provided a baseline measurement of how leaders evaluated as “outstanding,” “good,” and “average” scored on a scale of 1-7 for each of the competencies. A 1 indicates purely reactive behaviors with short-term impact, while a 7 represents highly proactive behaviors focused on broad, long-term impact.

The benchmarks for CIOs were impressive, especially for outstanding CIOs. In fact, outstanding CIOs performed comparably to outstanding CEOs in all competencies except Market Knowledge and Customer Focus. To get a basic relative snapshot of your own current strengths in these competencies, try the simplified public version of the Council’s c-suite competencies self assessment.

The portrait that emerges of the outstanding CIO is that of a business leader with strategic insight, someone who has both the experience and capability to leverage technology investments to drive measurable and sustainable business improvement or change. This is the “Business Strategist” CIO of the graph, who is almost indistinguishable from outstanding CEOs and presidents. According to the Council, this is also the kind of CIO most businesses will need in the future. The good CIO—or “Transformation CIO” of the graph—is also able to make IT an integral part of the business but lacks the degree of Strategic Orientation in combination with Market Knowledge to be a full-fledged strategist. The average-performing CIOs are represented as the “Function Head CIO,” primarily overseeing and delivering IT services.

An Assessment Framework and Development Roadmap

The gaps between these levels of CIO performance are significant, just as they are between senior IT leaders, IT managers and IT staff. In our experience, improving a single competency by a single point in our 1-7 point scale requires six months to a year, depending on ability to grow; improving two requires a year to two years; and so on.

For example, IT Senior Leaders differ from lower-level IT positions in their need for the competencies of People and Organizational Development and Team Leadership. They don’t lose the Functional Expertise that was so important to achieving top performance in earlier roles; but now they need to shift towards engaging a group of people to deliver expertise rather than having and delivering it themselves.

The CEO’s competency profile, shown on the extreme right side of the graph, indicates which competencies most dramatically separate the CEO from even the most advanced CIOs, or Business Strategists.

Understanding the competencies, their sequence of development and differentiation, and the degree of performance required at each level is valuable in three essential ways. First, it provides an assessment tool for CEOs who are looking to hire the right CIO for their needs. Second, it provides a framework that CIOs can use in selecting, promoting and developing team members. Third, it is the start of a personal developmental roadmap for IT professionals who aspire to be CIOs, and for current CIOs who want to make the most of the role.

For individuals, the implications of this developmental roadmap should be clear:

Start early: Although the gaps between levels are not unbridgeable, markedly improving competencies takes time. There’s no reason not to begin acquiring Market Knowledge, for example, or any of the other c-level competencies as soon as possible, though they might not become paramount until farther down the road. Starting early can considerably shorten that road.

Aim high: Ultimately, you should measure yourself not just against the outstanding CIO but against the outstanding CEO, who exhibits in the highest degree the combination of competencies required of a business leader. A CIO who is able to develop the same skills/competencies as the CEO will ultimately become a more valuable long-term member of the senior leadership team and potentially move beyond pure IT leadership roles.

Take control: It’s an article of faith among executive search professionals that people should consciously manage their careers and their development. You cannot expect that your employer will necessarily understand the right development path or set you on it. With a clear roadmap of the path to the Future-State CIO, you can seek the appropriate development opportunities.

The first step is to determine where on this path you really stand beyond the nominal level indicated by a job title. By exploring the nature of the requisite competencies and their combinations at each career level, subsequent installments in this series will help you do exactly that.

This article was first published on CIO.com and is republished on this website with kind permission of the magazine.