In search of self

Throughout our life stories, we shape the chief protagonist – ourselves. By Julian Baggini

Identity is much more mutable than we commonly imagine, shifting to match the various roles we play and the contexts in which we act. We sustain a sense of self not by always being the same, but by always adapting with integrity.

In Shakespeare’s Hamlet, Polonius’s advice to the young prince – “To thine own self be true” – has become a self-help cliché. Yet far from being a glib platitude, these six monosyllables raise profound questions. Being “true to thine own self” is more easily said than done.

In the corporate world, the idea of “authentic leadership” has been popular since Bill George’s book of the same name was published in 2003. There is much to be said for this idea, in particular the need to align strategy, action and values. But it seems to me that there is a philosophical problem at its heart. To be true to yourself, you need to have a clear sense of your identity – of what you are being true to. Only then can you claim to be acting authentically, in line with your core values. But how do we acquire this clear sense of identity? Who are you, really? This is a philosophical question, not a management puzzle. Our identity, common sense tells us, is a given; we each have a kind of fixed essence that makes us who we are, so all we have to do is to recognise and acknowledge it. On closer examination, however, identity is much more complicated.

First, identity is context-dependent. The same person can be aCEO, a daughter, a mother and a hiker. A person will feel, act and even think differently in the presence of siblings and parents and of colleagues in a boardroom. We all know the experience of almost regressing to our childhood selves at family reunions. Psychologists have even shown that what we remember varies according to context. Knowledge that we have at our fingertips when we sit at a desk working on a spreadsheet can be very hard to bring to mind when we are out with friends, walking in the countryside.

Second, our identities are in flux. Certain fundamental personality traits – such as introversion and extroversion – do appear to remain constant throughout life. But what we build on these foundations can change considerably over time. People move from back-room to management roles, for example, gradually taking on the identity of a leader. In private life, it is common for people to shift from identifying themselves as free-wheeling, young bons viveurs to assuming an identity as responsible parents. This implies that our identities are alterable to some degree.

Third, we can have varying attachments to our identities. Some we might feel very strongly indeed, unable even to imagine, for example, that our political or religious identity might no longer exist. Other identities we can carry much more lightly. An introverted public speaker can embrace the identity of the inspirational performer without ever feeling that it is an essential part of who he or she is. We identify with some of our identities more than with others.

Identity is, therefore, much more mutable than we commonly imagine. How can we use that to our advantage? First and foremost, we can resist falling into the trap of expectations, both our own and those of others. Too often, we assume that a particular identity is accompanied by particular characteristics, even though history shows that these assumptions are also highly variable. CEOs, for example, have at various times been thought of primarily as micro-managers, financial planners, team leaders, autocrats, visionaries, inspirers and strategic directors. What we assume to be essential to the identity of a CEO is often just the current fashion. Any role we take on always provides an opportunity to forge an identity of our own rather than conforming to an identity already associated with it.

Similarly, we can liberate ourselves from the pressure to conform to the identity we and others assume we have. The “safe pair of hands” might decide the time is right to take a risk; the “strong leader” might spot an opportunity for some productive delegation; the “good listener” might decide it’s time to speak for a change. When we spell this out, it sounds obvious. But identity can be a beguiling trap, and it often takes a self-conscious reminder that we are not bound by it to free ourselves from its chains.

We should also remember that identities can shift with context and make the most of that fact. Consistency is not sameness. There is no contradiction between being softly spoken in some contexts and speaking forcefully in others, as long as we are not conveying contradictory messages. Similarly, a major contract might call for hard bargaining, while an employee’s request for flexible working might require as much flexibility as we can provide. So we need to avoid cultivating identities that are too sweeping, such as “I am a tough negotiator” or “I am an accommodating manager”.

We must, however, ensure that there is rhyme and reason to our flexibility and that we are consciously responding to circumstances rather than simply being blown by the wind. To do this, we need to be very clear about the things that root our identity: narratives and values.

Narratives are very important for giving us a sense of who we are. The memories we retain and value are those that help us to make sense of our lives as a single story, one that may have surprising twists but that adds up to a coherent biography. Alarm bells should start ringing if acting in a certain way doesn’t fit our personal story, because to identify with an action is to see it as part of the wider story of our lives.

We also need to recognise that we are the authors of our own narratives, which means we get to shape the chief protagonist – ourselves. The best way is by doing. Both Aristotle and Confucius understood that the way to become a particular kind of person was to act in accordance with the character traits we desire, so that they become second nature. If we want to be more collaborative, for example, all we need do is create more opportunities for collaboration and make the effort to engage with them in the right mind-set. Eventually collaboration becomes part of our identity.

Good leaders never allow themselves to become stuck in old ways, mistaking mutable habits for immutable aspects of identity. Take Alex Ferguson, the former Manchester United manager. “Nobody has ever been so adept at evolving as the game evolved,” the Guardian’s Jonathan Wilson observed. The biggest change Wilson identifies in Ferguson was from a cavalier style to a much more defensive approach. Ferguson had long thought the former style was part of his club’s identity. “We always do it the hard way,” he would say. Only when he realised that this identity was not fixed could he address the team’s weaknesses.

However, when we think about the mutability of identity, it is important not to get too carried away and assume that we can be whoever we want. Identity evolves; it doesn’t change overnight. Furthermore, it is multi-faceted, so any change needs to be in harmony with what remains the same. We need to adapt our identity with integrity. Identity is in part a construct, one that needs to cohere if it is to stand up.

Tough ethical choices provide good examples of this. For instance, we might pride ourselves on never dropping a reliable supplier. But what happens if it becomes obvious that an alternative supplier will be much more cost-effective? To act with integrity here requires some hard thinking. You might need to adapt your self-image and see that the simple “never drop a good supplier” rule is not an integral part of your basic ethical principles. Alternatively, you might conclude that your values require you to sustain the long-term relationship even where that is less efficient in the short term. The dilemma presents an opportunity to develop your sense of identity.

The only wrong choice would be to simply try to forget you had ever had a commitment to good supplier relationships. All that would do is create dissonance – a tension between competing accounts of who we are. It is impossible to live indefinitely with such dissonance and remain healthy. For example, the former U. S. Ambassador to Syria, Robert Ford, explained his resignation to CNN by saying “I was no longer in a position where I felt I could defend American policy.” The clash between personal identity and professional role may be stark, while the dissonance may be subtler, draining us of motivation.

Having a coherent sense of our own identity is crucial to psychological well-being. People work most enthusiastically and productively when they perceive a close fit between their private identity and the one they need to adopt at work. I’ve been talking about personal identity, but as my remarks about Alex Ferguson and Manchester United suggest, they apply equally to corporate identity. If you were to re-read this article, replacing “we” and “you” with “the business” or “the organisation”, then most of it would make just as much sense. Corporate identity needs to be as flexible as personal identity, evolving with integrity by adopting the practices that inculcate the habits conducive to a successful and flourishing business.

“To thine own self be true” requires recognising that there is no single, fixed self. A clear sense of identity is based not on a conception of an immutable self but on a coherent idea of the narrative each of us is writing for ourselves and of the values that underpin it.

is a writer, journalist and co-founder of The Philosophers’ Magazine. His books include Freedom Regained: The Possibility of Free Will; The Pig That Wants to be Eaten and ninetynine other thought experiments; The Ego Trick; and What’s It All About? Philosophy and the Meaning of Life. 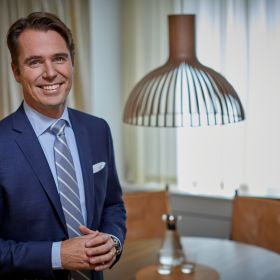 Jacob Rasin
Stockholm
Jacob Rasin, based in Stockholm, is a leader in Egon Zehnder’s Health and Private Equity practices in the Nordic countries. He has deep expertise…
阅读更多...