“Oxford taught me to make the most of everything.”

Marketplace or ivory tower? For many years a university of Oxford’s stature could afford to ignore the question. After all, its name is carved into the very roots of education. But the globalised world is no great respecter of such traditions. Every day it lays new challenges at Oxford’s door – to the university itself, to its curriculum and to its ability to hold its own against the competition. Lord Patten knows Oxford well, and not only as a graduate of Balliol College. It was above all the pragmatic and realistic approach of a politician of great international experience that led to him being appointed Chancellor of the University of Oxford.

The Focus: Lord Patten, what did it mean to you to study at Oxford?

Christopher Patten: I was the first member of my family to go to university, at a time when only six percent of my age group went to university at all. One of the things that impressed me was the Oxford learning experience, which is the most important aspect of the university. I think the learning experience at Oxford – when it is good – is better than anything else on offer. But on the whole, Oxford shaped my subsequent life more by the fortuitous than the intended. I had wanted to join the BBC or even go into advertising, but while studying at Balliol College I went to America on a scholarship, and to cut a long story short, I became involved in working for a political campaign and decided that politics was for me.

Patten: I think it is fundamentally the same. I suspect that the rewards are now much greater, and as a consequence probably narrower, and I’m not sure this is a good thing.

The Focus: Does “Oxbridge” open more doors today than it did then?

Patten: It has always opened doors, but some of the doors are now so gold-embossed that they attract more graduates into law, consultancy, banking and financial services than would once have been the case. The other day I was looking at what the blues boat crews have done on leaving university and it struck me that, a hundred years ago, the majority of them became missionaries. Now I bet the majority go and work for Goldman Sachs or J. P. Morgan or Citigroup. Are they learning more about the world out there than those missionaries were learning? I doubt it. They may work for a couple of years in Hong Kong or Tokyo and live in a very cosmopolitan environment but I doubt that they learn the language or really what is going on. I doubt that they really get under the surface of the society. In fact, I often wonder whether we are now living in a world in which the Chinese, for example, are learning a lot more about us than we are learning about them.

The Focus: Unlike a hundred years ago, you have many overseas students at Oxford. Is there a proposition that makes Oxford more compelling than the Ivy League universities?

Patten: Interestingly enough, at Oxford we attract almost three times as many Chinese as Indians. That is counter-intuitive, because the Indians don’t have to learn the language before they come here. To some extent it is the result of the Chinese deliberately deciding that they want to put their eggs in more than one basket, and don’t want all their best people to go off to an Ivy League university. But it is also the result of Indian kids thinking that Oxford is a bit old-fashioned. So we have to struggle to appeal as much to the Indians as we do to the Chinese and that is one priority for me. We are doing much better with the Saïd Business School in that respect. We have about 220 people on the MBAcourse this year and 60 of them are Indians, compared with only 30 last year.

“If we stopped teaching undergraduates, we would be approximately £ 25 million better off. That is crazy.” 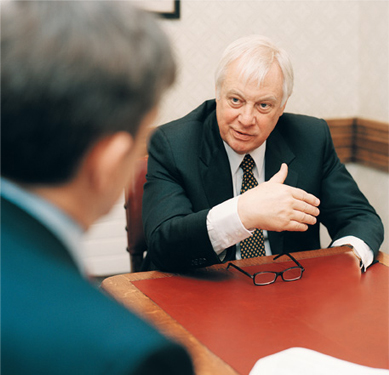 The Focus: How do you incorporate the aims that a business school has in educating individuals to an MBA with the broader ideals of Oxford?

Patten: Some of the most popular courses now at Oxford are mixed courses, such as Engineering and Management or Engineering and Economics. If we were able to develop those courses and have, say, Physics and Economics or Chemistry and Economics, we could fill every course. The trouble is that such courses are very expensive to run and we have to bankroll them out of what we make on the Executive MBAprogramme. If we stopped teaching undergraduates, we would be approximately £ 25 million better off. That is crazy, but it is partly a consequence of our teaching style and partly a consequence of the funding by the government.

The Focus: To what extent can one influence what is taught at business school so that the graduates emerge with a broader business education – thinking of Corporate Social Responsibility, for example?

Patten: I am very impressed by the extent to which our MBA students in general understand that most of the things one talks about in CSR are not optional add-ons, and not things you do for the corporate image, but a fundamental part of doing business successfully today. There is a real sense of those commitments, just as there is an understanding that we have to look to the market much more for solutions to the sort of problems that we have assumed, in the past, could only be countered by public initiative and public money.

The Focus: One relatively new feature of business education at Oxford is the Oxford Entrepreneurs initiative that promotes entrepreneurship among students. Is that a product of the business school or the university?

Patten: It came from Saïd Business School and it has proved an exceptionally successful initiative – like the school itself, which owes its success first and foremost to a very generous donor who attached no strings to the money he put into the business school, except a commitment to excellence. Moreover, the school has been very well run, so that in just ten years it has established itself internationally and acquired a very good reputation. The figures show that it is also very successful in placing its graduates.

The Focus: To what extent does that sort of funding and being able to reward the academic community matter in an institution like Oxford?

Patten: Let me put it this way: if you get a first-class degree, the rewards if you go off to a bank or a consultancy firm are huge, so if you stay on at university after your first degree you are being asked to make a vast financial sacrifice. If you go to any British university and want to meet the British Economics Ph. D. students, you won’t find many. That is a reflection of the fact that we reward so badly in the academic community, and that the sacrifice that people are obliged to make to remain academics in this country is vast. This worries me a lot.

The Focus: Is it not also a legacy of an uneasy relationship between universities and business?

Patten: It is one of the consequences of the underfunding of the higher education sector. In the UK, we spend 1.1 percent of our budget on our education, which is the European average. America spends 2.6 percent. The American public sector spends more on higher education as a proportion of GDP than we do, so it is not true, as some people suggest, that the main difference is accounted for by private endowments, although private endowments are a large part of the picture.

The Focus: Are there particular areas of education that are likely to become increasingly important?

Patten: We have to strike a balance between education as a rigorous, liberal way of developing personalities and strengthening pluralism in society, and education as a way of boosting GDP or economic development. One of the things we see at Oxford is a growing enthusiasm for mixed subjects, which is fine. But we must guard against degrees that give people little tastes of too many things, so they don’t really learn to do anything rigorously.

The Focus: How did Oxford help prepare you for the critical times in your career, such as in Hong Kong?

Patten: Oxford helped me learn to pick up and retain information very quickly. As a government minister I was always quite good at reading a brief fast. As European Commissioner for External Relations, I would go on a tour of four or five countries and between stops I had to forget what I had just learned about Serbia, for example, and relearn about Bosnia. That may be fairly superficial learning, but the ability to perform well under such circumstances is in part a consequence of a good education. Oxford taught me to be interested in ideas. It gave me a self-confidence that I didn’t have before. And it inspired in me a boundless curiosity and a very strong sense that, since you only come this way once, you have to make the most of everything.

Lord Patten of Barnes (62), Chancellor of the University of Oxford, is perhaps better known as the last Governor of Hong Kong. In this role, from 1992 to 1997 he was responsible for preparing the colony for the handover to China – earning a great deal of respect in the process for his self-confident and proactive handling of the task. Before this unique mission put him in the public spotlight, Chris Patten had built a successful career in British politics. This led him from the Conservative Party Research Institute, via a seat in the House of Commons (1979), to a cabinet post. In 1986 he became Minister for Overseas Development at the Foreign and Commonwealth Office and three years later he was appointed Secretary of State for the Environment. On his return from the Far East, in 1998 he was appointed Chairman of the Independent Commission on Policing for Northern Ireland and in 1999 became a member of the EU Commission, with responsibility for External Relations. At the same time as holding European office he became Chancellor of Newcastle University in 1999 and was elected Chancellor of the University of Oxford in 2003 – thus returning to the seat of learning where he once studied Modern History.