For some time now, HR leaders have been giving thought to the young generation of high potentials who will soon be taking on prominent roles in the business sector, as well as in politics and society at large. Commonly referred to as ‘digital natives’ or members of Generation Y or Net, they grew up with the Internet as a prime cultural technique in an age marked by globalization, economic crises and advancing individualization. Rumor has it that they are confronting companies with a whole new wish-list of requirements and will likely impose a new order on the world of work.

So how do the members of this generation themselves describe their motivators and needs as future leaders and to what extent does this go with the image that HR leaders have of them? Can we at this stage formulate an accurate standard definition of the up-and-coming generation of high potentials and the way they want to work? A great deal has already been said and written about the extremely high demands being made by ambitious 20 – 30 year-olds. But when one compares their self-image with the view that HR leaders have of them, it soon becomes clear that there are marked differences regarding central aspects. In contrast to the stereotyped image of the risk-loving, totally independent and digitally networked young adult portrayed in the media, the high potentials present a diversified picture by no means lacking in traditional values such as meaning, loyalty and security, and marked by heterogeneous mindsets and role models. Such are the findings of the study “Self-image and external perception of the up-an-coming generation of young professionals − Digital Natives Challenge HR Leaders” conducted by Egon Zehnder in conjunction with stiftung neue verantwortung between December 2011 and January 2012. In this quantitative survey, 154 alumni of stiftung neue verantwortung and students from various faculties (the average ages being 33 and 23 respectively) and 104 HR leaders (approximate average age 48) were asked for their views of what motivates the young generation and of possible future scenarios.

The top executives of the future: Disciplined, modest, and rich in social skills

One aspect on which all respondents agree is that the world of work will see significant change within the next ten years. Where there are surprising differences between the alumni/students and HR leaders is in their views of the motivating factors and profile of the top executives of the future.

“Enjoyable work” and “personal development” are the core motivators for young professionals − on this point there is agreement between the two groups. But while the HR leaders consider “career opportunities” and “participation options” as further important drivers, the alumni and students name “meaningful work” as their next priority. Similar disagreement is found when it comes to the profile of the high potentials.

Taking a view closely related to the “classical digital native”, the HR leaders describe the clear profile of an innovative, self-assured, freedom-loving, independent-minded person with a high affinity for risk. The digital natives, by contrast, paint a strikingly diverse picture of themselves and emphasize such classical virtues as discipline and modesty. “Risk-loving” is ranked no higher than mid-range, while some actually selected “traditionally minded” as an important character trait. The two respondent groups do agree, however, when it comes to the key competencies that will be required in the future: social skills will become more important, while specialist skills will not be more in demand than they already are.

Fundamental differences also emerge when it comes to the question of the ideal work situation. Here too the HR leaders expect to find high demands in terms of mobility, flexibility and digital networking and imagine a homogeneous group of high potential who seem to value autonomy more than long-term commitments. The alumni and students, by contrast, paint a heterogeneous picture: while one third indicate that mobility is important, another third are keen to stay in one place. With only a minority stating that digital networking is a priority, the majority state that personal contacts with colleagues and business partners are desirable. Finally, one fourth of the alumni/students can imagine making a long-term commitment to a company – while the topic of loyalty barely appears on the radar for the HR leaders. Both groups are expecting to see a progressively more digital way of working and a work-life flow in which the boundary between professional and private life becomes increasingly blurred.

The diverse needs of a powerful group

The study shows that the future top executives have diverse expectations of their profession and their ideal work situation. The strengths and characteristics they describe are so heterogeneous that it is impossible to derive a uniform picture, let alone a stereotype. This diversity leaves HR facing substantial challenges, because one thing is clear to all HR leaders: the growing demand for top talents coincides with a shrinking talent pool. To win the battle for young high potentials, they will have to come up with new approaches that enable them to do more than just address specific groups in a standardized way. Instead, they must find ways of responding to the diversity and individuality of the needs and demands of the young talents. HR will have to keep the up-and-coming generation firmly in the spotlight while at the same time aiming to establish direct contact. What is already clear is that companies will have to develop individual concepts, maybe even tailor-made solutions drafted at face-to-face meetings, if they are going to recruit and retain the best and brightest members of Generation Y. 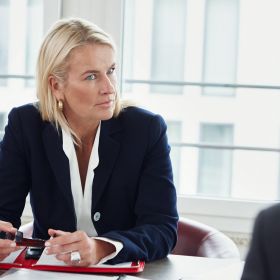