A CEO can offer an authoritative account of current facts and future goals and bring relevant audiences on board, thus increasing the chances that the desired future may become reality.

A CEO is a crossbreed of a philosopher and an artist. Like a philosopher, a CEO must enjoy tackling open problems that are constrained by facts and figures but that cannot entirely be answered by either (call them challenges). And like an artist, a good CEO must be creative, in order to devise innovative solutions that are feasible for the business, fruitful for the shareholders, and acceptable to the stakeholders. This is clearly a demanding task. Merely timely tactics won’t do, certainly not in the long run. The best long-term strategy is to develop a successful vision within which open problems can become meaningful and solvable. Such a vision is not a prediction about a determined future. Rather, it is a statement about how the present can be changed into a desirable future. This means that a great top executive must have a whole story in mind about how things are currently going and how they could be improved, not unlike a chess master. And sooner or later this powerful story becomes indistinguishable from the person who is telling it. The narrator becomes the narrative. So the questions whether and how far such a narrative can or indeed should be communicated to the world are much more complex than just thinking about public relations or advertising.

Let me focus on “whether” first. When it comes to social media, there seem to be three basic assumptions circulating among top executives who are not digital natives. That there is a clear divide between offline and online, with genuine, authentic communication occurring only on this side of the screen, where people can shake hands in person. That any narrative, any story-telling, is at worst a distraction and at best a PR preoccupation. And that online story-telling is even more irrelevant, something to be left to kids and geeks. In any mature information society, these three assumptions are dangerous misconceptions.

First, the online/offline divide is exactly what the social media have rendered anachronistic. In the last decade, the world has moved “onlife”, with people organizing a meeting on Facebook and facebooking the meeting they are having, seamlessly. Nobody goes online anymore, we are always on, and the world of business lives in the infosphere 24 / 7.

Second, in the infosphere, if you are not telling the story then you are one of the characters. By this I mean that if you do not write the narrative, someone else will write it for you, and the outcome is likely to be much less pleasant.
Third, it follows that story-telling – presenting the narrative of a vision – is becoming vital in the world of business. This is an important point that requires some unpacking. By skilfully shaping a narrative, a CEO is able to influence people’s minds. The opportunity to persuade is precious, for a CEO can offer an authoritative account of current facts and future goals, and bring a relevant audience on board, thus increasing the chances that the desired future may become reality. Of course the risks should not be underestimated. In a world constantly bombarded by all kinds of media, people remember four things: the utterly bizarre, the very silly, the remarkably smart, and the oddly silent.

The first two need no explanation in terms of risk. The third is equally obvious: every communicator wants to be remembered for having said something clever. So better avoid merely repeating bits of news that becomes old in no time anyway, and predictions, which are always risky unless they are trivial. What readers want are insights, comments on current affairs, ideas they have not found elsewhere, a perspective that casts new light on a topic of interest, an answer to a widespread question. In short, they want to participate in the mental life of the CEO through some valuable content. This may seem unpleasantly intrusive, but it has a great advantage: a personal communication is more compelling, the public can relate more easily to a human figurehead, and, within limits, there may be fewer legal risks and liabilities in offering some good ideas. It is the fourth point that is most problematic, because silence is a powerful form of communication, and sometimes it can be very loud, particularly if its source is influential and expected to engage. People will remember it. So it needs to be used judiciously. Not expressing one’s position on a relevant issue, being absent among the important voices debating a specific development involving one’s own business, or, even worse, being explicit about one’s unwillingness to comment upon some relevant events, even when publicly asked: these may all be very damaging forms of communication that can undermine confidence in a CEO. So keeping quiet is a risk that a top executive can hardly afford to take. Which means that presenting a convincing narrative is really the only strategy to avoid being caught between the embarrassingly bizarre or silly on the one hand, and the awkward silence on the other.CEOs should communicate the vision that identifies them. 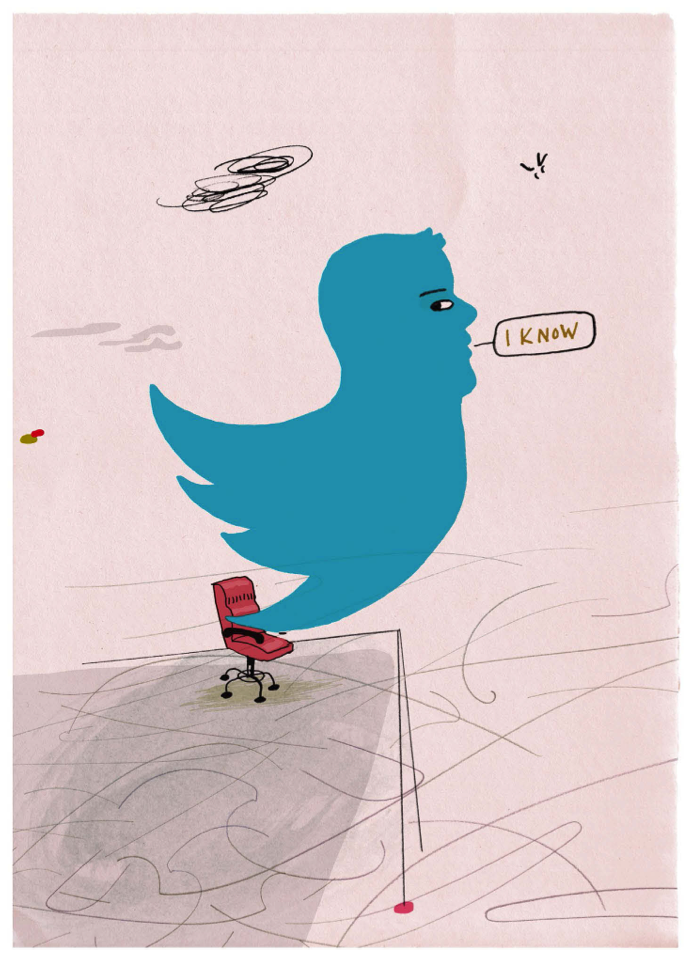 Consider next “how far” such communication should go. I am not talking about the occasional op-ed in a newspaper or magazine, or an interview for a TV channel. I am talking about a digital presence in social media. A CEO’s identity is his or her vision, which is disseminated as a narrative that unfolds through time in small communication episodes. Should such a narrative be made public through a Facebook page, a blog, or a Twitter account, for example? The answer is another cautious yes. Cautious because three more problems lie ahead. One may miscommunicate.

If done inadvertently, it is better to acknowledge the mistake and apologise as soon as possible.

If done deliberately, it is vital to reconsider this strategy immediately. Never lie. Truth tends to bubble up, sooner or later, especially when billions of people are online and watching. Next, one may communicate poorly. Obscure analyses, indirect messages sent between the lines, petty comments, trivialities … such bad narratives are more damaging than silence, and we have already seen how bad silence can be. Finally, one may fail to communicate despite having promised to. Social media are insatiable beasts: once unleashed, they must be fed content on a regular basis, even when one has little or nothing to share, or they will bite back. They can bear some repetition but not silence. A semi-abandoned blog, Facebook page, or Twitter account is worse than no communication at all. They look unreliably careless.

The phrase “Chief Executive Officer” has been used since the 19th century. CEOs have had two hundred years to refine the best communication practices in a world of mass media that, for a long time, did not demand dramatic change. Andrew Carnegie, Henry Ford, Andrew W. Mellon, J. P. Morgan, and John D. Rockefeller didn’t tweet, and neither did Abraham Lincoln. Things are very different today. Barack Obama does, and so does Bill Gates. Top executives should not underestimate the importance of being present on social media. It is an opportunity that is worth all its implicit risks. Leadership is changing significantly due to the scope, speed, and spread of communication. Today the old model of delegation of decisional power, given once and then exercised for a specific amount of time, is being replaced, both in politics and in business, by a constant engagement with all the parties involved; and this, in a global age, means potentially with the world itself. Leaders are expected to share the vision that identifies them, and to do so in an open-ended, continuous conversation with social media through a regular narrative that, in the end, represents both who they are and a strong voice for the companies they represent. This is a time-consuming, sensitive commitment of paramount importance. It cannot be improvised, and a CEO should probably rely on a highly professional team that can be trusted to curate, at the right time, through the right digital media, with respect to the right issues, and in the right manner, the flow of information that ultimately shapes the long-term identity of the CEO’s leadership and company. It is only a matter of time before the 21 st century will witness the emergence of Chief Executive Communicators, who will be as important as the trusted lawyers in whom the CEO confides.

About the Author: Luciano Floridi

Luciano Floridi is the director of research, and professor of philosophy and ethics of information, at the Oxford Internet Institute, University of Oxford. He is a member of the Google Advisory Council on the Right to be Forgotten. His latest book is The Fourth Revolution: How the Infosphere is Reshaping Human Reality (Oxford University Press, 2014).