Originally published in The Hindu, 14 August 2018.

How India can tap into new sources of leadership talent

Most CEOs are grappling with one particular challenge, irrespective of industry or geography: getting the right leadership talent. Governments face this challenge too. The Indian government has responded to this challenge by taking the initiative to invite executives from beyond the ranks of the civil service to apply for certain Joint Secretary posts. While the idea clearly has merit, success is not automatically guaranteed. At Egon Zehnder we have worked extensively with governments around the world on similar initiatives, and have identified five elements that increase the chances of success.

The key decision makers involved in making a senior appointment rarely agree on what skills, qualities and experiences the role requires— and when they do, there is no guarantee that the requirements agreed to are the ones that are actually needed to be successful. This is why the process must begin with a real probing of the position and its larger context. For example, prior to one county’s national elections, we were asked to establish the hiring criteria for 100 key governmental appointments. We interviewed current and former officeholders; mapped strategic priorities; and factored in the cultural differences between ministries. The result: a foundational talent strategy that could be used by whichever party won.

Having objective criteria also gives decision makers confidence that their appointments will be able to stand up to public scrutiny without fear of seeming biased towards or against candidates for caste, geography, political affiliation or other considerations.

Target the talent you need.

Public announcements inviting lateral entry applicants for open government positions preserve transparency but are not very effective recruiting strategies. Top talent has many options outside of public service. Government, therefore, cannot sit back and wait for these candidates to present themselves. It must proactively identify and approach executives with the desired skills and experience. Precisely because the competition for talent is so intense, most successful corporations — even those regarded as highly desirable employers — follow this strategy. Very often governments are reluctant to follow suit so as to not appear to favour candidates. This is where the objective criteria come in. The fact that a given executive is approached and encouraged to apply is no guarantee that he or she will be appointed.

We worked with a freshly installed administration in Latin America to build an extensive database of hundreds of private sector leaders considered to have the skills necessary to help fight the country’s urgent economic and social challenges. These executives were then proactively invited to apply and added to the pool of open application candidates. We then assessed this expanded group and recommended numerous successful candidates to key roles.

Look for potential to succeed in this environment.

Our work with governments around the world suggests that in addition to the right motivation there are three key personal traits that predict success of lateral hires in such roles.

The first is resilience. Government bureaucracy can be tough on outsiders; it is essential to have the ability to persevere in the face of constant pulls and pressures and aligning multiple stakeholders.

Successful lateral hires also have a high level of curiosity. They acknowledge that they don’t have all the answers, are eager to learn and model their behaviour accordingly. These candidates know that while they may have many useful new ideas, they also have much to learn from career civil servants and that government has its own systems, formal and informal, that must be grasped before any innovations can be proposed.

Finally, they have the ability to engage others. The ability to build consensus among stakeholders is essential.

Less is more when it comes to selection panels

The government screening process traditionally includes appearing before a section panel of three to five interviewers, who each take their turn investigating topics they have divided between themselves. Unfortunately, this approach often results in only a surface-level understanding of the candidate. We have found that one-on-one or two-on-one interviews allow for a much more meaningful exploration of key points of a candidate’s career, their mindset and approach.

More focussed interviews should be supplemented with extensive referencing with finalist candidates. This combination of data will provide insight into a candidate’s character, integrity and moral compass — all critical qualities for government roles.

Successful recruiting is only part of the equation; the selected lateral hire must also be primed for success in his or her new organisation. We were able to demonstrate the benefits of a systematic approach with a senior executive that we hired for the cabinet of a European country. We started by identifying cultural differences between the executive’s old and new environments and helped develop strategies the executive could use to navigate this change. We then created an extensive playbook with detailed profiles of the management team outlining each person’s priorities and concerns, and provided coaching to help the executive best position himself with his new peers.

India’s lateral entry programme has the potential to introduce new thinking and new expertise into key ministries. Leveraging on lessons learned elsewhere will allow India to more completely draw from the country’s rich array of talent while maintaining the objectivity necessary to preserve the public trust. 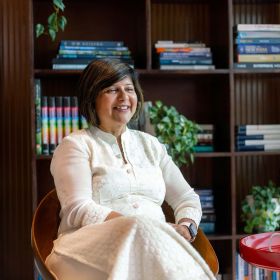 Pallavi Kathuria
New Delhi
Pallavi Kathuria is a core member of the firm’s India, APAC and Global Technology & Communications Practice. She was the Managing Partner of Egon…
Changing language