Equality vs. Equity: A Reimagined, Diverse and Inclusive Search Process

Before we talk about the search process, it is important to align on the definition of D&I in a company context. Several definitions exist, but a commonly accepted one is:

A big and common mistake organizations make is to treat their D&I objectives as an add-on to a search process. This is not just a missed opportunity and a recipe for frustration; it is also a misunderstanding of the D&I agenda.

In addition, search processes are often replete with unconscious biases, unintentionally designed to recruit in the mold of the people who already work in the organization, creating vicious reinforcing cycles that oppose D&I objectives rather than support them.

The way organizations correct for this is to insist that diversity is a major priority in a search, which is helpful, but there is a reticence to tweak the fundamentals of the search process itself. Insisting on diverse hires without any change to underlying practices can imply that “we need more diverse employees, but they need to be more like us.” This can have implications on the ability to find candidates, and later on, retention and job satisfaction levels.

We strongly believe that organizations need a diverse and inclusive search process, which calls for a reimagining of the process itself. The table below explains how a new search process could work.

The Equality vs. Equity Debate

Reimagining the search process: Not as a binary either / or, but finding the best balance with purpose and confidence 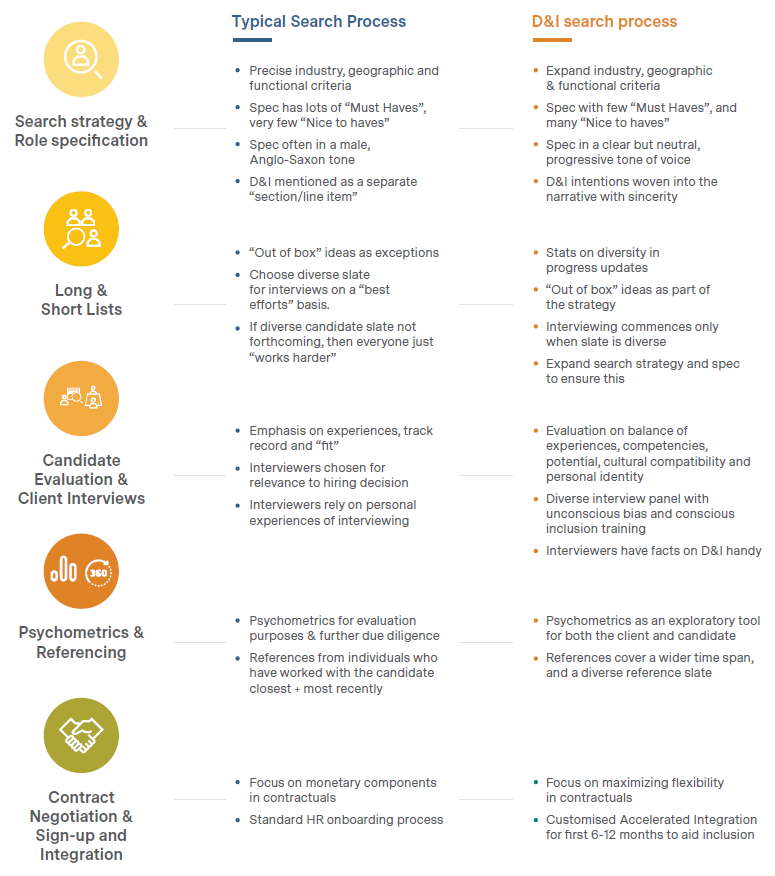 At each step, it is not just about working harder but about thinking and acting differently. We strongly believe that only when companies start doing this consistently will change happen more structurally. To be clear, we don’t see this as binary, but as a spectrum that companies must explore with increasing levels of confidence.

For example, pursuing narrow geographical, industry, and functional experience in the search strategy dramatically increases the chances of an “all-White” long list of candidates. Companies must ask themselves: “Where can proxies be found for functional, geographical, and industry experience so that I can expand rather than contract my search universe?”

Similarly, role specifications are often written in the tone and in the mold of the majority ethnic and gender group in the company. At the risk of making a stereotypical point, but only for emphasis, if the dominant company culture is alpha-male, Anglo-Saxon, replete with an overreliance on buzzwords such as “value creation,” “financial outcomes,” and “personal accountability” above all else, this can turn off candidates who are more diverse in their personal characteristics, thought processes, and value systems.

Mentions of diversity and inclusion in the role specification are increasingly common, but often veers from tokenistic to overbearing, both of which can elicit negative reactions from candidates.

Addressing all of the above means that you are likely to have a long list of candidates, which includes ethnic diversity. We are confident that most progressively minded organizations would logically want to shortlist/interview at least a few ethnically diverse candidates. But in a small number of cases, overreliance on “hooks” that resonate with the hiring manager (e.g., familiar background, familiar set of companies worked for, familiar career trajectory) makes less diverse candidates appear as “safe bets” on paper. On the flip side, an overreliance on personal markers, such as gender and ethnicity, can mean shortlisting on those personal characteristics alone.

A good balance would be an insistence that the interview shortlist be diverse before proceeding with interviews. An example of this is the Rooney Rule, which traces its origin to the National Football League in the United States. It requires teams to interview ethnic minority candidates for head coaching and senior football operations roles and has been adopted by some companies.

Once candidates have been shortlisted, how they are evaluated matters a great deal to the final outcome. Historically, there has been an overreliance on past experience and track record. Though that should continue to have a healthy representation in the overall evaluation mix, it can lead to less diverse outcomes. If you want to increase the diversity and inclusiveness of your workforce, other criteria, such as a person’s leadership potential, (as evidenced by their curiosity, insights, engagement and determination), cultural contributions, personal identity, and the differentiation that they could bring to the collective make-up of the organization, are important to consider.

For example, a first-generation immigrant from an ethnically diverse background in the UK would need to rely on curiosity to observe separate cultures at home and outside, insights about different problem-solving approaches, emotional intelligence and engagement to fit in, and determination to surmount the challenges that he or she will inevitably face growing up. Although research is at an early stage, it is not unreasonable to assume that one’s personal circumstances can be linked to future management potential, and why shouldn’t companies benefit?

Interviewing comes next. Historically, an interview panel is composed of people intimately involved in the hiring decision. A diverse panel would be more balanced and provide a more rounded representation of the company, leading to a more holistic experience for the candidate. Unfortunately, very little interview training has been offered to senior leaders on how to explore D&I topics in an interview setting and make the experience consciously inclusive.

Among the most common unconscious biases are implicit assumptions made on implying trade-offs between ethnicity and meritocracy (e.g., “I would love a diverse candidate, but without compromising on quality”). Similarly, wanting “gravitas” as a leader is often mentioned. However, this could favor candidates from cultures that encourage the demonstration of social confidence and discriminate against those from cultures where this could be frowned upon or where English is not the first language.

Conscious inclusion, on the other hand, is about confidently exploring someone’s “lived experience” as an active and positive part of the process, rather than something to be assumed or inferred from tangential conversation. How has their ethnic background shaped them? How does it make them look differently at a situation? How has it influenced the career and life choices they have made? How do they retain their distinctiveness? What worries them about how they are perceived? Similarly, most senior leaders are not familiar with their organizations’ diversity statistics and are often stumped when asked this question by candidates. Despite best intentions all around, there is inadequate senior level interview training and support mechanisms on the D&I agenda that has been offered to senior leaders. That is a missed opportunity.

Psychometrics are a further under-explored avenue – they are increasingly used by companies as part of their evaluation of candidates, and could be a great exploratory tool for both clients and candidates to engage in a deeper dialogue, build trust and relationships, and deepen comfort levels and understanding of each other. Psychometric tools are the launch pad to take the conversation to a place of greater authenticity and could be the difference between yes and no for a client who may be on the fence about a candidate, or vice versa. However, the emphasis of psychometrics would need to shift from being a tool just for a client to evaluate a candidate to something that is jointly used by both client and candidate to appreciate the differences and seek common ground.

Referencing also can be reimagined, as ethnically diverse candidates can go through significant “identity shifts” over time as they adapt their identities to their work surroundings. References on an ethnically diverse Chinese or Indian candidate who has spent a year in the UK, coming from a much more deferential and hierarchical “home” culture, might sound very different when taken in a few years’ time after the individual has adapted to their new surroundings. To get a holistic view, unlike referencing in a typical search process that puts a premium on the more “recent,” in a diverse and inclusive process, there should be a greater emphasis on reference evolution over time.

Contract negotiation and closure is also an avenue for differentiation, as diverse talent may value different things (e.g., a female senior leader who is a mother may value workplace flexibility, while an ethnically diverse leader may prefer to live in a cosmopolitan location where he can blend in easier). Thinking beyond Base + Bonus + Long-Term Incentive Plan and more decisively about solving for what is most critical for the individual in front of you is well worth the effort.

Finally, once an individual has joined an organization, HR teams helpfully and automatically apply their standard on-boarding processes. Unfortunately, these are likely to be insufficient, as diverse talent may need more structured support in mapping stakeholders, relationship building, understanding cultural nuances, work rhythms, connecting with other diverse individuals from a similar background, etc. Inclusion should not be left to organic effort and chance, but should be systemically established through what we call an “Accelerated Integration” process.

We believe that a reimagined search process is a crucial “game changing” moment on the ethnicity agenda.

III. The Letter (and Spirit) of the Law

VII. Ethnic Diversity as Part of the Broader D&I Agenda

VIII. Legitimate (and not so Legitimate) Counter-Arguments