The Letter (and Spirit) of the Law

Anyone who is passionate about the Diversity, Equity & Inclusion (DE&I) agenda in the UK should familiarize himself or herself with the 2010 Equality Act. Worried senior leadership teams that feel exposed on their diversity statistics could currently be at risk of falling foul of both the letter and spirit of the act.

The act also states that Positive Discrimination in favor of a protected characteristic is also unlawful. What the law does permit is Positive Action to support greater representation of protected characteristics in the workforce. There is often a thin line between Positive Action and Positive Discrimination, and companies are at risk of falling into the latter category of actions. For example, specific budgets and developmental programs for ethnic minorities within the workforce are supported. Expanding the definition of how jobs are defined to attract a greater proportion of ethnic minority candidates would also be promoted. In an equal merit or tiebreaker situation, choosing an ethnic minority candidate over someone who was not an ethnic minority would all fall under Positive Action, and therefore, the right side of the law.

The reality is that organizations are under tremendous pressure to make gender and ethnic minority appointments into particular roles and often have implicit or explicit mandates to deprioritize any candidate who does not fit the “diversity” bill. We are at a moment of genuine opportunity where companies in the UK have woken up to the ethnicity agenda. At the same time, we worry about the long-term consequences and potential future backlash of going against the spirit of the act, and strongly encourage each company to pause and take stock of the risks worth taking in the pursuit of positive action and the red lines to avoid.

Another area worth shedding some light on is the topic of “individual consent” to be classified as ethnically diverse. Egon Zehnder is not equipped to dispense legal advice, and we only raise this topic because we passionately believe that if companies are too cautious too early on the issue of “individual consent,” it can damage progress on the ethnicity agenda. Current regulations may allow you to go to reasonable lengths in the pursuit of positive action before you are formally required to seek consent of the individual.

Let’s assume a situation where you don’t have the formal consent of an individual to be classified as ethnically diverse. An instinctive reaction could be “we cannot consider them ethnically diverse.” We urge you to think again. The following provides a potential decision tree that we find helpful, but you can feel free to construct your own. 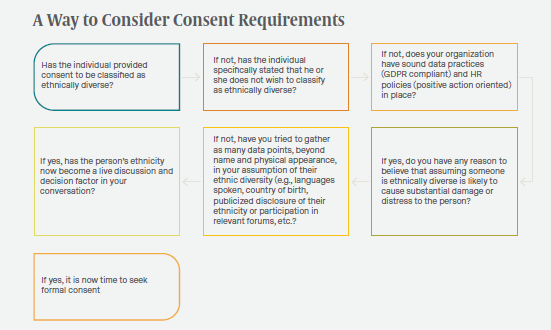 It is far better to use logic and good judgement for as long as you feel comfortable because over-cautiousness or over-reliance on self-reported evidence goes counter to the intended positive outcomes. The impact of not considering someone as ethnically diverse unless they self-report versus when it is ethically necessary to is often going to be the difference between making and not making an ethnically diverse hire.

Common sense should also apply if someone refuses consent to be considered ethnically diverse. It is clear that for official statistics, the individual’s ethnicity should not be counted as belonging to any particular category, and be categorized as “prefer not to say.” It is also fair to assume that the individual would probably not want to discuss his or her own ethnicity with others. This does not mean this individual is not diverse or would not be a differentiated addition to a team or organization.

The law and regulations are there to aid positive outcomes, not supress them or to stop people applying good judgement.

III. The Letter (and Spirit) of the Law

VII. Ethnic Diversity as Part of the Broader D&I Agenda

VIII. Legitimate (and not so Legitimate) Counter-Arguments